On behalf of the IFSP Council and membership, Ms Bencini welcomed the recent reorganisation at the MFSA the appointment of Prof Mamo as the new non-executive Chairman and and in particular the appointment of Mr Joseph Cuschieri as CEO, a reorganisation that should allow the Authority to tackle the task of regulating a fast-changing sector, and to continue to provide the service levels everyone in the industry has come to expect. In particular, she thanked the outgoing Chairman of the MFSA, Prof Joseph Bannister, for having through his unstinting efforts, put Malta on the map for financial services.

She outlined the efforts of the Institute over the previous 12 months, all aimed at consolidating and improving the financial services industry in Malta, many of which the Institute continues to pursue through representations to the authorities on a variety of issues which have an impact on the sector as well as on the broader economy and reputation of Malta.

Ms Bencini emphasised that it is up to practitioners to uphold Malta’s standing as a reputable and reliable financial services centre and indeed, as an attractive jurisdiction in which to conduct business.
Dr Wayne Pisani, the incoming IFSP President and the new IFSP Council thanked Ms Bencini for her work over the past three years, during which the industry in Malta has faced ever increasing pressure on a number of fronts.

The Institute of Financial Services Practitioners has more than 400 members and is continuously growing with new applications being received every month. The Institute represents the interests on the financial services practitioner working in Malta across the entire range of financial services, regardless of the profession or subsector. It achieves this by representing the views of the practitioners to the government, the regulatory (and other) authorities, and on an European level by keeping in touch with Malta’s MEPs. The Institute also holds seminars, conferences and courses for its members and other practitioners to communicate new developments, to tap into opinions and to promote best practice. 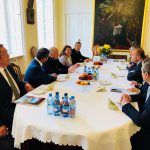